FREE SHIPPING ON ORDERS OVER $50

I love this product. It absorbed nicely and makes my skin feel great.

I love this product. It is wonderful

All in all, I'm very very happy with this vac and recommend it. As someone who has never had a robovac before, here are some thoughts to manage expectations (most of the cons are probably true of any robovac on the market and not particular to the Eufy):Pros:-Picks up dust from hardwood floors! I guess I never realized when sweeping how I was really only picking up larger dirt particles and just redistributing the dust. My floors feel A LOT cleaner than before.-Customer service from Eufy. I was having some issues with my vac early on and they were incredibly responsive and went above and beyond.-Easy and intuitive to empty the bin and clean the brushes.-Quiet-Thin enough to get under things like my fridge, stove, bookshelves. Especially where I can't fit a broom or regular vacuum.-Strong suction!-Has held up quite well to the times my dog decides she wants to play with it and chases it around the house biting it.-Instead of barreling into furniture legs like other robovacs I've seen, it senses them and will avoid them (or will do a very gentle and non-damaging bump).-I've been impressed with how it can get itself out of some tight situations where I'd think it would get stuck.-Cleans corners well.-Doesn't get stuck in curtains or high pile carpet.-The beater bar is very gentle on my lower pile rugs.Cons:-It's not as 'automatic' and self-sufficient as my hopes and dreams. There's a fair amount of prep before I put it on and then I have to be home to monitor it as it can get stuck where hardwood floor, rug and furniture come together or on a lip between rooms of my house. That being said, it's nice to put it on when I'm cooking dinner or drinking coffee to multitask.-I'm not sure it has any mapping features. During certain runs, it gets 'obsessed' with particular corners or areas of my house while ignoring others. Sometimes even when I pick it up and try to make it go somewhere else it will turn around and return. The heart wants what it wants.-Because of this, it's best to run it everyday instead of when you really, really need it. When your floors are really dirty, it can be frustrating to watch it not get what you want it to and go over a certain space multiple times. That being said, I'd rather run this every day vs. my previous method of watching dirt build and clean all at once.-Also not great when there's a particular area (or piece) of dirt driving you crazy since you never know where it's going to go (there is a manual remote feature but sometimes it's just easier to grab the regular vac and do it).-Magnetic strips don't stay down very well. I've quit using them.-Can get tangled in wires (like phone chargers) very easily and it's a pain to get them out.-Sometimes doesn't get the dirt that's right near the above-mentioned 'lip' that separates rooms with hardwood floors to tile.-Despite having a one-story house, I need to manually pick it up and put it in certain rooms since it tends to not want to go there - for example, it won't go over my cold-air return grate in my hallway and rarely 'wants' to go into my bathroom for some reason.-I was having problems with the scheduling feature (not running when I had scheduled it; would turn scheduling off and then it would occasionally run during previously scheduled time - it was truly bizarre) but as I said above, Eufy customer service was stellar and sent me a new remote along with new brushes since mine got mangled during its unexpected runs. I haven't retried the scheduling feature to see if it's now working (since I really need to be home to monitor it anyway).

I love this company and their products! This cream has a pleasant scent, is heavier than the day formula but not pasty or sticky. It blends in easily and you only need a small amount. I totally recommend it!

e
e.
hydrated and happy. As a professional makeup artist

I adore this product! I have VERY sensitive skin that is dry and acne prone. My skin is glowing, hydrated and happy. As a professional makeup artist, I whole heartedly endorse this product! 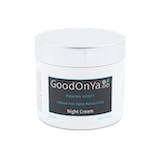